On this National Coming OUT Day of 2012, I thought I'd share a link that will allow you to modify a photo of you to use on your social media sites.  For most of us it was very hard to take that step to come out to our loved ones...but this can be a means to share with others what we all have accomplished by being honest with ourselves.  Have a Great Day Men.  Darrel 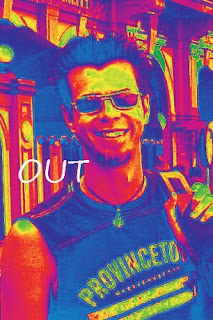 This is an "OUT!" picture of me, to celebrate National Coming Out Day. If you'd like to create one of/for yourself, there's a tutorial on deviantART that you can follow.
http://moonbeam13.deviantart.com/journal/Count-Me-Out-223689711
And this is the site you go to, to edit your picture:http://pixlr.com/editor/

While I am here typing away on this, my very first blog, I have this incredible urge to use my best Jean Luc Picard voice and begin with the star date...I will spare you some of my "trekkieness", but to me this is kind of a monumental day as I have been toying with the idea of writing about what it means to be a gay dad for many years now.  For me, it began not long after my son was born over 18 years ago.  I was still married and had finally begun to deal with and manage my sexuality honestly.  So, to take this step and actually put the words down and have them read by others may in fact require a log entry with a star date so here it goes...

I am not an expert, nor do I have some secret, mind blowing revelations about Gay Fatherhood.  I am however, a father of two amazing young people that have taught me a few things about what it means to be a man that they call "Dad".  I am sure many, if not most, of you also have things that you can share about what it means to you to be addressed by this title.  What makes me being called dad is so much more than the biology of it all.  I know of many men who became fathers and it was not really a conscious decision on their part.  Oh sure, they engaged in the activity that led to conception but did they really think of what it means to be a dad in that moment?  Not likely.  It is also not entirely the nurture aspect of being a father.  I think the world of my own Dad, but we are two entirely different people and opposite in parenting.

I can recall that even as a young child wanting to be a father.  Maybe that was because it was so deeply ingrained in me by my maternal grandmother who had wanted a granddaughter so badly that she made I and my two brothers all promise to have her great-granddaughters first (which we all did by the way).  So as I grew up, it was just the natural progression for me to think that I'd be a father.  After all, that is what people do; they grow up, get married and have a family.  But, being a person that would also eventually discover that he was in fact 'gay' might have put a kink in that logic at a much sooner star date had it not been for a strict religious upbringing that I was raised with.  My folks were very conservative so the idea that one would be homosexual was a sure ticket to "hell" with out the $200.00 at GO.  And so here I am, a gay father of two with no regrets as to how I got them.  I have had to work through many of the challenges that come with not only being a father but also of being father who is gay.

I have chatted with others from this group, and in fact, it was in some part due to this online community that I am here on this blog today.  I began a quest to find information and seek others who shared my experiences.    When I began my search for information, I found a website called Gay Fatherhood  where men could chat and share their experiences with other men around the globe.  I found men in my community who had been or were still  married with children and came out.  I met men who had divorced that needed to share their experiences. Even though I found others who shared my experience, what I did not find was others who had written anything, good or bad, in the form of  books, articles or other written forms of communication regarding other men who were/are fathers first and then OUT gay men.

I did find support in these  men and hopefully was able to support some through sharing my own joys and struggles while balancing a new life as a gay man who had children and had not been a part of the larger LGBT community up to this point in my life.  By that I mean, we became husbands and then fathers who"came out" later and had to find ways to merge those divergent aspects into a workable life.  For many that has not been easy.  In reality it is/ was the 'Hell' that my folks has raised me to believe.in.  But for other men who are fathers who happen to be gay, they have found ways to make it work and have in the process, been able to raise some amazing children.  So I am going to try to convey some of this oral tradition and online "chat" tradition into something that may be helpful to more men who are going through or will go through being first a father and then later a "gay dad".  This is not to say that I intend to alienate any of the men who knew and accepted their homosexuality earlier and did not go the traditional  societal path of "First comes Love, then Comes Marriage, then comes the Baby in the Baby Carriage...".

Gay Fathers come in all forms.  I just happen to be one that did not find much in the way of information or support from the LGBT community because I was one of those 'Late Bloomers'.  I had in fact been married, had "real sex" with a woman and had my own biological children without surrogacy or adoption.  I felt alienated on some levels among other gay parents in the LGBT community because of that fact.  The books I was able to find and read all gave information and support to couples seeking to become parents with out the biological act of conception between the parents to be.  I might also add that many I have spoken to regarding my own marriage and having my own children naturally is a repulsive thought.  Some of my closest gay male friends cannot imagine ever having sex with women.  I just giggle a bit under my breath and remind them that the larger society feels the same way regarding sexual activities they engage in as well.  So I guess my initial urge to quote Star Trek was accurate.  I AM an alien in a strange world,  Gay Fathers are too often perceived as having that extra limb or cranial ridges like a Klingon even among the LGBT community.  And so here I go...to new frontiers and new galaxies and  I trust that some of my blog entries, thoughts and musings will in some way help others in their own quest for information to the galaxy that few have gone before, for these are the voyages of Gay Fathers everywhere.
Posted by Unknown at 10/04/2012 01:41:00 PM 1 comment:

For My Young Friends Who Are Afraid

I am usually not for name calling in political debates, but its time to face the truth; the crazy people who the Republicans are proposing as presidential candidates are so detached from reality, let alone compassion or leadership ability, that it is beyond all reason and belief. So here is a rant worth reading: Dear Republican Party
Posted by David, Son of Walt at 11/13/2011 11:54:00 PM No comments:

What Would You Do? Gay Bashing

Thanks to my dear friend David M. for posting this on Facebook tonight. Nicely done.

You may recall the original video posted by Marcel here on the GF blog when David Cook won American Idol 2008. I have to say I really like this response on the Jimmy Kimmel show this week.

I think I want to get the entire video by Dr. John Corvino. Here's an extended version of the trailer. Thanks for the link, Craig!

What Dads are Talking About